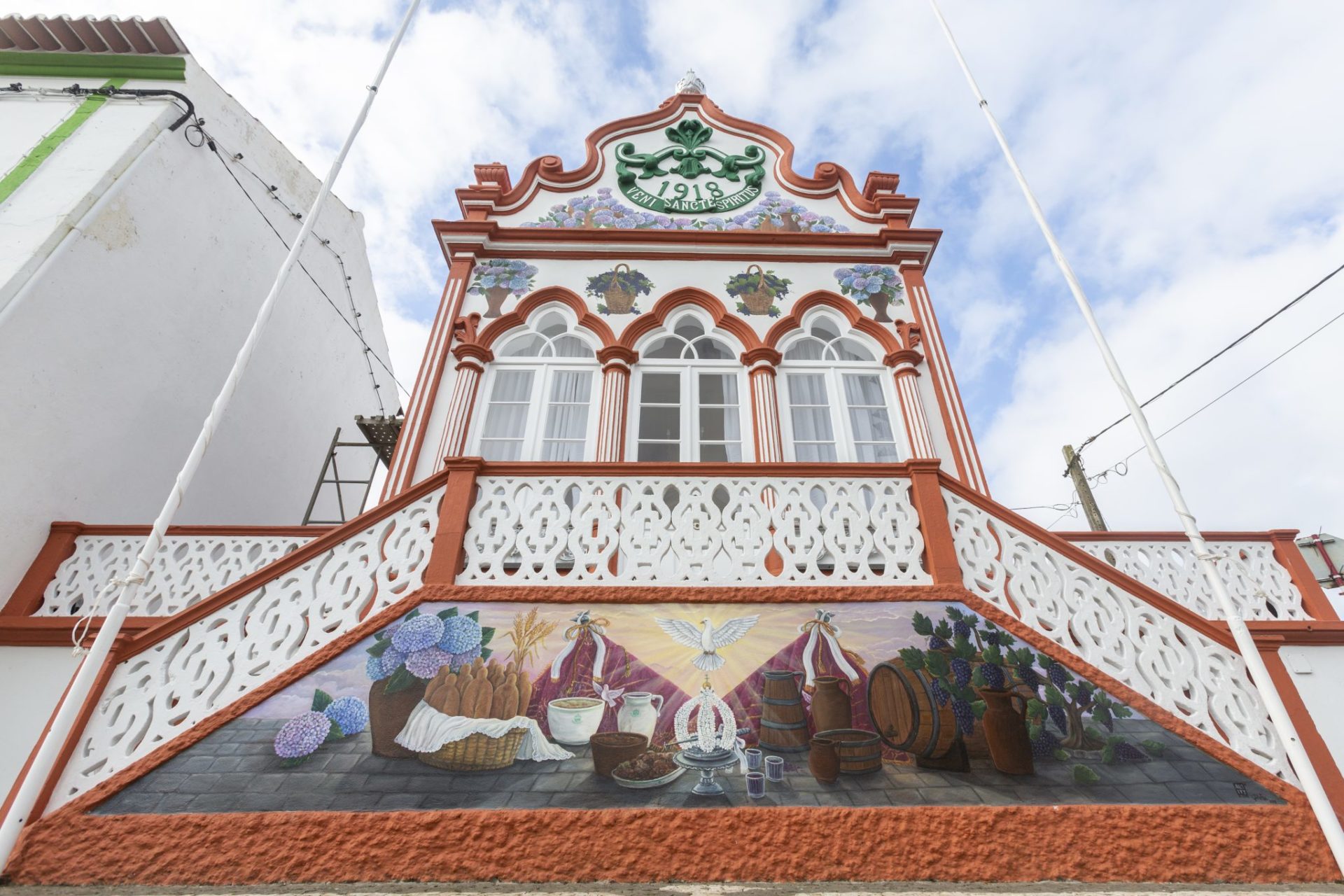 The Império of the Holy Spirit of Vila de S. Sebastião, Angra do Heroísmo municipality, Terceira Island, is located on Rua da Igreja and was founded in the first quarter of the 20th century in the year 1918. This brotherhood celebrates the feasts of the Divine Holy Spirit on the Sundays of Pentecost and the Holy Trinity, on the 7th and 8th Sundays after Easter, respectively.

Feasts of the Divine Holy Spirit in this village:

On the 8th Sunday of the Holy Spirit, the stewards appoint the butlers of the following year.

During the period between the appointment and the beginning of the weeks of the Holy Spirit, butlers prepare the bodos, inviting the creators who will create the animals that will be used in the brotherhoods, which are delivered on Saturday of the Bodo, contact the wine producer to be distributed also in the brotherhoods, just as they do with the bread supplier. During this time, the stewards maintain the belongings of the império and the building and also organize the delivery of the crowns to the emperors, that is, to the people who took the 8 Sundays of the Holy Spirit, which each per se, during 5 weeks, keep the Holy Spirit in their homes.

On Easter Sunday, butlers take the Holy Spirit’s crowns to the church to be blessed and the emperor of the 1st Sunday takes them to his house. The emperor, during the week, prays the rosary to the Divine Holy Spirit, making an altar to worship Him. On the Friday before Sunday, they adorn the calf that will be killed to give the meat to the soups and tarts that are offered to the guests on the Sunday of the Holy Spirit. On Sunday, the emperor takes the Holy Spirit to the church for the coronation and then the guests go in procession to the place where they will be served lunch. After that, they return in procession and take the insignia to the house of the next emperor. This process happens on every Sunday of the Holy Spirit.

In the week leading up to the 7th and 8th Sunday, on Wednesday, the stewards will pick up the wine, making this act a social gathering. On Thursday, they receive in the império the bottles that will be filled with wine to be delivered to the brotherhoods on Saturday. This happens again the following week. On Friday, stewardship takes place. These are the responsibility of the butlers, usually half each week. The purpose of stewardship is to adorn the calf, symbol of the animals that will be killed for the brotherhoods to offer on the Sabbath of every bodo, as well as to gather the bread that will also be given that day and the next day. Every butler has his guests who accompany him in procession to the Empire, where all butlers and their guests, already carrying the bread in baskets, meet and go together to decorate the calf, together with the image of the Queen Santa Isabel, accompanied by the Philharmonic. Finishing to decorate the calf, they go around the parish displaying the animal and return to the Empire, where they leave the bread, the calf and the andor of the saint. The stewards who do not have stewardship are in the Empire toasting the Philharmonic, while the other butlers who have the stewards go to their houses with their guests where they serve bread, cheese, wine among other delicacies according to the criterion of each one. Later that day, the other butlers who remained in the Empire, go in procession along with the image of the Santa and the philharmonic and „run“ the houses of the stewards who have the stewardships. The bearers at the moment are the butlers of the Bodo bullfight. The bullfight takes place on Tuesday after the 2nd Bodo and has an independent commission that deals with just that. After given the return by the stewards, they return to bring the raft of the Queen Santa Isabel to the Império.

On the Saturday of the Bodo in the morning in the empire’s larder, they depart and bag the meat that will be given that afternoon, along with bread and wine. On Saturday afternoon, after the tables are ready with the brotherhoods to be delivered, the stewards take the Holy Spirit to the Church together with the image of Saint Elizabeth. After the mass, they take the scroll and a crown in procession to the square where the brotherhoods are to be blessed by the Lord and are distributed later. It is also customary to go to the home of the breeders to bring bread, meat and wine as a sign of thanks.

On Sunday of the Bodo, in the morning, the butlers go to the Empire to receive the offerings to the Divine that, later, will be finished in the Bodo. The Emperor of Sunday, takes the Holy Spirit to the church for the coronation. The butlers remain in the Empire until the exit of the Divine of the church, where it is guarded until the end of the Bodo, and later it is taken to the house of the next emperor. After Mass, there are offerings and are raised on the Sundays of the Holy Spirit of the following year. On the 8th Sunday the butlers of the bodo and of the bullfight are appointed for the following year. On the two Sundays, in the afternoon, the Bodo takes place in the square, where a salutary relationship with all the brothers and the butlers is promoted. In this space there is bread, cheese and wine among other delicacies. The bodo is animated by the philharmonic. Also there are usually gatherings during the Bodo.