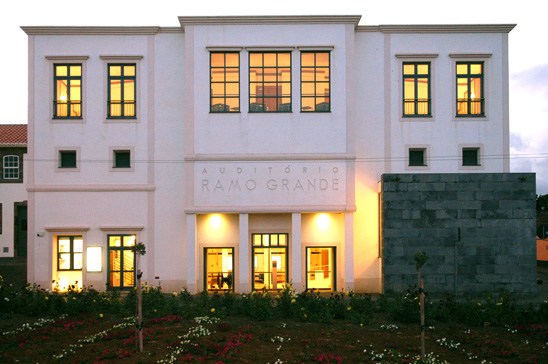 The Ramo Grande Auditorium was inaugurated in the town of Praia da Vitória on 5th April, 2003, and opened with a performance of the operetta “Dia de S. Vapor”, by Luís Gil Bettencourt. Since then, thousands of people have attended a wide range of performances there. The building belongs to the Praia Cultural Cooperative, under the presidency of Praia da Vitória Town Council and the vice-presidency of the Filarmónica União Praiense philharmonic society. The building comprises a theatre and various rooms which can be and have been used for the recording of compact discs and modern DVDs, as well as for any type of performance, with equipment for live radio and television broadcasts of the various events. It has a total capacity around 450 persons.