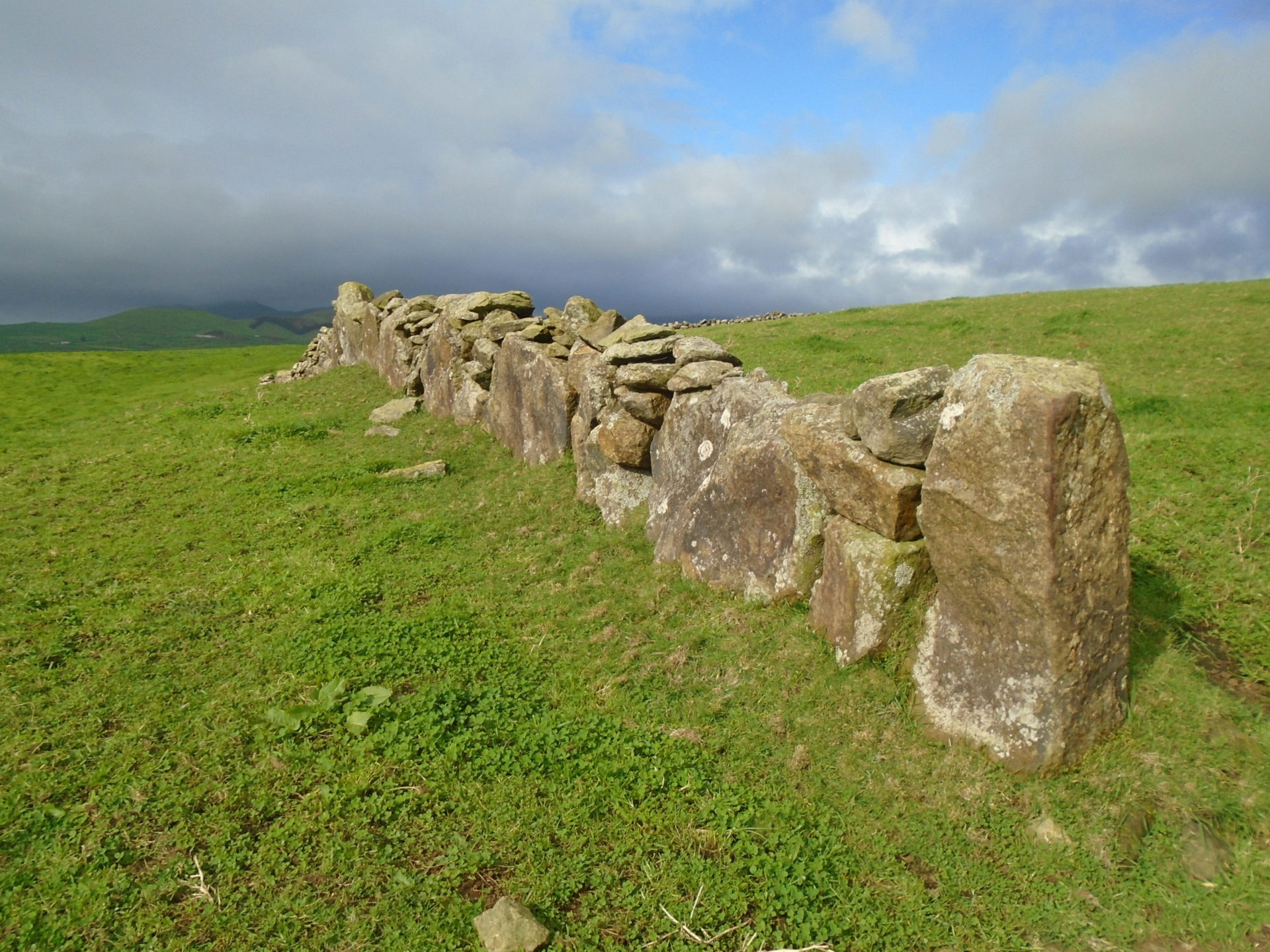 By: Antonieta Costa, Master in Medieval History and Culture

A strip of land packed with Menhires crosses the plateau of Serra do Cume in Terceira Island in the direction NNW to SEE, measuring c. 3km x 1km.

Among the massive array of “conspicuous signs” of unusual nature present in Terceira Island, the “Menhires” are among the most notorious.

Identified as so by comparison with European analogous rocks(triangular and quadrangular rocks measuring a minimum of 1m border but some of them going to 3ms or more) they vary from the continental ones by its volcanic nature: trachyte, a clear, almost white rock different from the usual volcanic materials.

In general their surface is covered with diverse kinds of inscriptions, some of them possible to identify as letters and others designs – but rarely do they depict human figure: mostly birds and reptiles or also sea creatures.

Most of these Menhires are now incorporated on the walls of the farming fields of the plateau or otherwise laying on the floor especially the bigger ones, along the walls on the 3kms strip of land.

An inventory (regarding number by each wall) has already indexed 5140 (using the model presented on photo) leaving out (not yet registered) c.1/6 of the area, calculated in c.1000.

No other place in the Island has this sort of rocks neither the other Islands of the Azores, which brings questions as: who and when were they made?

Considering that the natural form of these rocks (in lava phase) is rounded, the work applied to transform them into the actual “stele” shape is impossible to be calculated. Wikipedia defines “A stele, or occasionally stela (plural stelas or stelæ), when derived from Latin, is a stone or wooden slab, generally taller than it is wide, erected in the ancient world as a monument. The surface of the stele often has text, ornamentation, or both. These may be inscribed, carved in relief, or painted. Stelae were created for many reasons. Grave stelae were used for funerary or commemorative purposes.”…/… “Steles have also been used to publish laws and decrees, to record a ruler’s exploits and honors, to mark sacred territories or mortgaged properties, as territorial markers, as the boundary steles of Akhenaton at Amarna, or to commemorate military victories. They were widely used in Mesopotamia, Greece, Egypt, Somalia.”

Bearing in mind the importance of the role these stones play in the readings of the landscape, it becomes a mystery to find them in Terceira Island, not only in such magnitude, as also “incognito”, or being ignored by all – population and authorities. Their existence points to human presence and action out of any doubts prior to the Portuguese onset. Its nature and implied volume of work, as well as the culture and historic paradigm of the XV century contradicts the Portuguese authorship.

Fortunately it is possible to observe them either by walking along the walls or passing by car through the roads of the Serreta Plateau, where they are incorporated in the fences along the way, turning possible to appreciate the strange triangular and quadrangular big rocks. (map)

Local description (official or common) of these monuments is inexistent. Considering that a Military Chart of the Island, done in 1841, gives detailed information about the surrounding fields, it does not refer this important section (the one with the Menhires), as it is possible to see on the unique blank spot of the area inside the Crater, while the fields around are designed in detail (walls).

Possibly, the situation is maintained static by a lack of success in decoding the supposed messages and unknown forms of expressions present on the Menhires as “inscriptions”.

In addition, their isolated geographical location has increased the mystery and probably the silence around them: they have never been mentioned, not even to refer the arduous work dispended in including the huge rocks in walls, sometimes in inclined terrains.

The absurdity of the entire situation helped to keep the secrecy: how to explain time consuming activities over objects without any apparent meaning or value – either in present, or in XV century? And plus – demanding such enormous physical effort in dealing with the heavy boulders for apparently no reason as an outcome, as well as taking in consideration the fact that it happened in environmental isolation from continents and other peopled areas. It certainly would be a strange occupation for newcomers on the XV cent. – especially without apparent benefits.

At present, they are ideal witnesses to maintain connection with a distant (and still unknown) past.