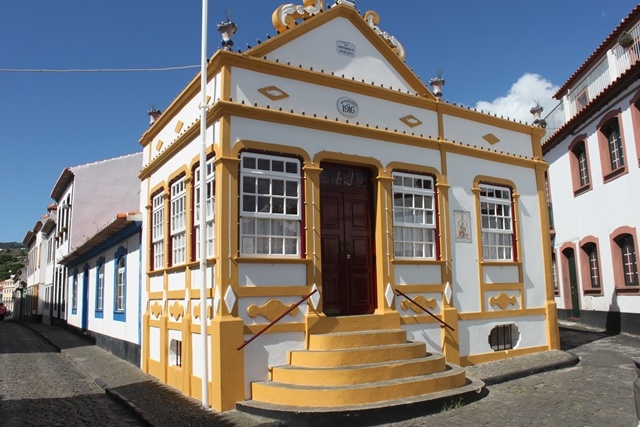 The Império dos Quatro Cantos, in the parish of Sé, municipality of Angra do Heroísmo – Terceira island, is located at Rua Recreio dos Artistas. It is a property built in the first quarter of the 19th century, namely in 1810 and rebuilt in 1916. This Brotherhood celebrates its feast in honor of the Holy Spirit, on Sunday of the Holy Trinity – 2nd “bodo”.

The current building grouped together the wooden empires that were built for the celebration of the cult of the Holy Spirit in the streets of Jesus and Canos Verdes, whose crowns are an integral part of its heritage.

This Brotherhood is made up of approximately 50 caretaker brothers and an unlimited number of brothers in charge.

The Festivities Committee is responsible for organizing the festivities program.

The festivities program consists of two distinct parts: one of a religious nature and another of a playful/cultural nature. The richness and variety of activities that make up the program of these festivities, especially those in the cultural area, depend, from year to year, on the available budget for this purpose.

The festivities in praise of the Holy Spirit, promoted by Império dos Quatro Cantos, begin with the change of the crown to the Empire and end on the Monday following Trinity Sunday.

The festival program, in addition to the various events of a religious nature, includes other cultural initiatives, such as musical performances and activities for the youngest.

As far as the religious part is concerned, the rosary is recited every day of the week in the empire, in which all people who wish to do so can participate. On the Sunday of the festival, the usual gathering takes place next to the empire, from where the procession leaves for the church. It goes to the Cathedral where the festive coronation mass is celebrated. After this liturgical act, the service returns to the empire and the bodo takes place. That same day, at night, the extraction of the portfolios for the following year takes place.

During the week, the traditional “pezinho” is held, and on the same day at night (Thursday) there is the so-called “Ceia dos Criadores”. Also during the week, normally on Fridays, in the morning, meat is distributed and, in the afternoon, alms are donated by the most needy, next to the empire.

The program is also complemented with performances by different associations/musical groups. On Monday, the last day of the festival, there is a milkshake in the morning and a series of activities for the youngest in the afternoon. This day is normally closed with the performance of a musical group.