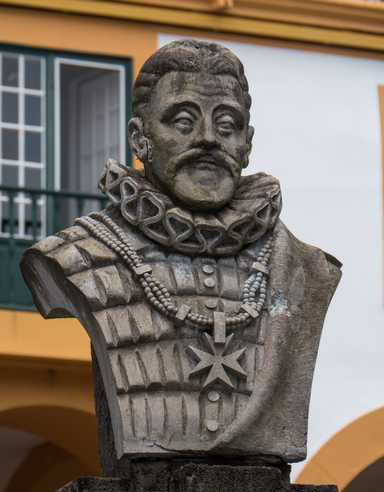 Statue of António de Portugal, Prior do Crato

Statue of António de Portugal, Prior do Crato

In 1580, during preparations for the Spanish invasion, Dom António was acclaimed King of Portugal by the people. Meanwhile, on 25th August, his troops were defeated in the Battle of Alcântara. Until 1582, King António went into hiding until he eventually arrived in Terceira, which had taken his side, and where he continued to govern. He disembarked in the town of São Sebastião, and then marched to the gates of São Bento, where he was awaited by Ciprião de Figueiredo, the count of Torres Vedras, Manuel Silva and other prominent local figures. On the island, he visited Salga Bay (where Spanish troops had first attempted to land but were totally defeated) and the bay of Praia. He immediately determined to reinforce Angra’s defences, both against pirate attacks and the imminent threat of a further Spanish attack and was fully supported in this by Dona Violante do Canto.