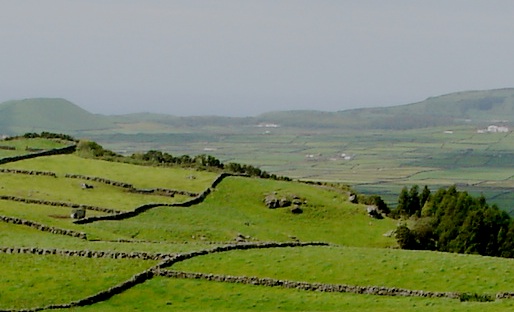 Apparently, It is possible to find here expressed in the architecture of the landscape, the mystics of “Trinity” through the feature of the “Three Goddesses” – in reference to the old Spirit of the “ternary concept” (Sumerian/Babylonian/Greek).

It is represented by “Nature” or natural elements, articulated in clusters of three components each.

The kind of rupestral landscape to find in Terceira Island is characterized by very simple rustic signals, sometimes difficult to be perceived.

In result it demands great concentration observing not only each object/site but also its distribution on the area, where they are disperse on the terrain but in connection with each other.

Here in Group 1, it is possible to observe the combination of “natural marks” with others man-made, forming clusters of three elements – as in the archaic tradition where complex systems of accounting could as well integrate cosmic, spiritual, plus charm and invocative practices, as seems to occur in this place:

5b – Three groups of three basins each

6 – Representation of the Dragon (with a basin)

7 – Representation of a reptile over two basins

Number 7 – Representations of the Dragon

Reinforcing the hypothesis of the “Tree Godesses” representation being an allusion to “female ascendancy”, Group 1 also approaches the myth of the Dragon (which develops through Serra do Cume’s 8 Groups, in a line 3km long, starting in this place and running till last group). The two symbols of the reptile personage on this place may be associated to the Sumerian traditions, representing Tiamat, the Godess/Dragon of the creation. In the same way, the presence, number and specific location of the basins may also refer to the nature of Tiamat as “Sea Serpent”.

Bachelor of Arts in Sociology, University of Maryland, 1983

Post/doc in Anthropology of Space and Landscape, Porto University, 2017