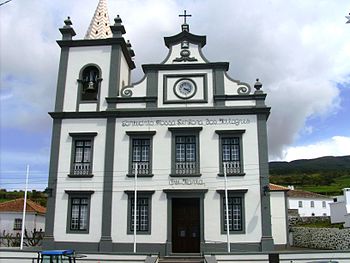 The origin of the devotion to Nossa Senhora dos Milagres [Our Lady of Miracles], in Serreta, dates back to the end of the 17th century, when the priest Isidro Fagundes Machado considered himself to be the victim of unfair persecution and he went into hiding in a place called Queimado, in the area of what is now called Serreta. He built a small shrine there, where he placed an image of Our Lady with the Child Jesus. The first commitment to building a church in Serreta was in 1772, which involved the reconstruction of the shrine to the Virgin Mary. The church was completed in 1842, and housed the image which had been worshipped for over a century in the church of São Jorge das Doze Ribeiras. That new church, which stood in the square, near the Serreta Holy Spirit shrine, was on the opposite side of the road to the current church, and was modest in size. With the rise in population and its new administrative status, a new church was planned, on the other side of the road. It took a long time to build and was inaugurated in 1907. After being severely damaged in the earthquake of 1st January, 1980, it was totally reconstructed in the same style.