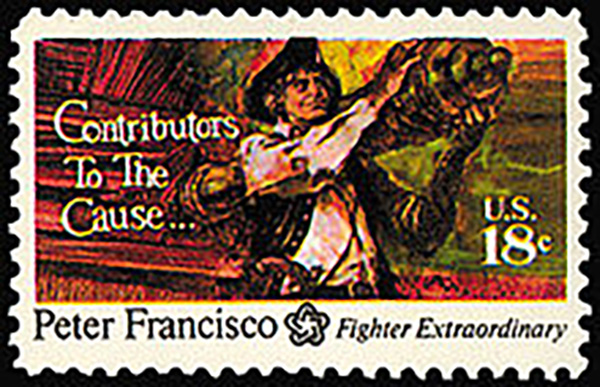 “A six-and-a-half-foot-tall Hercules holding a six-foot-long saber, Peter Francis was probably the most extraordinary soldier of the American Revolutionary War”

Pedro Francisco Machado (Porto Judeu, 1760 – Richmond, January 16, 1831), referred to as Peter Francisco in the USA, was a Portuguese, born in the parish of Porto Judeu, Angra do Heroísmo municipality, Terceira island, Azores, stood out as hero in the War of Independence of the United States of America.

Known as “The Giant of Virginia,” the “Giant of the Revolution,” and occasionally as the “Hercules of Virginia,” he is honored by the Portuguese community in New Bedford, Mass., On March 15. He fought alongside George Washington and of the Marquis de Lafayette, having suffered numerous injuries in combat, in defense of the independence of his homeland of adoption.

His biography is surrounded by an aura of legend, and extraordinary achievements are attributed to him. Its origins are relatively obscure. He was found at an early age (presumably five years), one afternoon on June 23, 1765, crying, on the docks of City Point, Virginia. When he had calmed down enough to speak, he realized that he did not speak English, but a language similar to Portuguese. Although he had nothing to identify with, his clothes were of good quality, and on the belt buckle the initials “P.F.” were read.

Eventually she was able to tell her story: she said that “she was in a beautiful place with palm trees, playing with her little sister, when two big men caught them both.” The sister managed to free herself from the captors but the boy did not, and was taken to a large ship that eventually led him to City Point.

About its origins, the investigator John E. Manahan identified that, in the registries of births of the island Terceira, in the Azores, exists a Pedro Francisco born in Porto Judeu, 9 of July of 1760.

The child was taken in by Judge Anthony Winston, of Buckingham County in Virginia, an uncle of Patrick Henry. When he was old enough to work, he was instructed as a blacksmith, because of his enormous size and strength (he was over 1.98 meters and weighed about 120 kg). The writer Samuel Shepard, who observed the young man in his work, noted:

“His shoulders are like those of an ancient statue, like a figure of the imagination of Michelangelo, like his Moses but not like David. His jaw is long, strong, his nose is imposing, the tilt of the forehead partially concealed by his His voice was soft, surprising me, as if a bull won. “

With rumors of secession spreading among the population of Virginia, Francisco enlisted at the age of 16 in the 10th Virginia Regiment. It was present, next to the church of St. John in Richmond, when Patrick Henry made his famous speech “Freedom or Death”. In September 1777 he served under General George Washington at Brandywine Creek in Pennsylvania, where colonist forces tried to stop the advance of 12,500 British troops advancing toward Philadelphia. It is not clear if it was at this point that young Francis saved his life in Washington, even though it was recognized that the young man was shot here. Some reports claim that he became General’s personal bodyguard while others realize that he was only an aggressive and vigorous soldier who fought at his side. It was Washington who determined that a special sword, appropriate to its size, should be made for Francis. It was this six-foot-long sword that terrified the British. Washington later reportedly referred to Francis: “Without him we would have lost two crucial battles, probably the war and with it our freedom. He was truly an Army of One Man.”

After serving on this commission for three years, Francisco again enlisted and fought one of the greatest defeats suffered by the colonist forces in the conflict. At the Battle of Camden (August 16, 1780, he would have carried out one of his most famous feats when, after settlers retired to the British, leaving an immense piece of artillery with approximately 1000 pounds, it is said that Francis put it on the back and carried it so that it would not fall into the hands of the enemy.In honor of this achievement, the United States Post Office issued a commemorative stamp in 1974.

In a short time the stories about Francis were being scattered and his stories of bravery and vigor were spread in many newspapers and novels at the time, inspiring encouragement and encouraging resistance among settler forces.

While most of these stories lack documentary sources, Frances Pollard of the Virginia Historical Society, who presented an exposé on the conflict that included a section on Francis with the giant vest he used to wear, said:

“I think one of the things I had difficulty in documenting was his participation in many of the battles where he performed historical feats, and I have never been able to separate the legend from the facts or find evidence of its participation in some of these battles. somebody with that size so out of the ordinary. “

Later, in 1850, historian Benson Lossing recorded in the Pictorial Field Book of the Revolution that “a brave Virginian cast down 11 men at once with his sword.” One of the soldiers bound Francisco’s leg to his horse with a and while the attacker, assisted by the giant, was pulling the bayonet with terrible force, Francisco pulled his sword and cracked up to the shoulders on the poor man’s head! “

Later, as he recovered, Francis became friends with Lafayette.

Francisco suffered six more injuries while serving his country, having killed an uncertain number of Britons and been decorated at the end of the conflict by US generals who made sure that he was present at the surrender of General Charles Cornwallis and the British at Yorktown, October 19, 1781.

According to tradition, after the conflict, because of the legends created around them, many adventurers came to meet him to test their strength. In this period he was dubbed “America’s Strongest Man” while children learned about their strengths and bravery in the new country’s elementary schools.

Eventually he became a wealthy man, being named beleague of the Virginia House of Representatives, remaining a legendary figure until his death. He was buried with military honors at the Shockoe Hill Cemetery in Richmond, Virginia.

On January 18, 1831, the Richmond Enquirer announced his death: “Your Honor Sr. Peter Francisco, beleaguer of the House of Representatives and soldier of the War of the American Revolution, praised for his intrepid courage and for his brilliant deeds . “